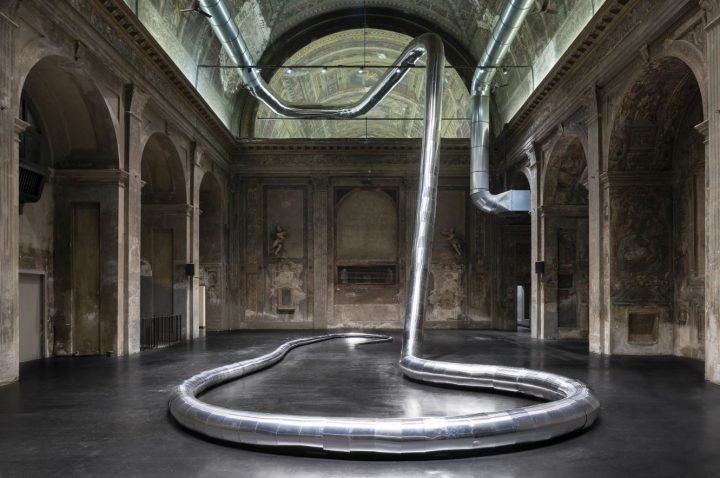 The sculptures of Inge Mahn are socially-minded. Through her spatial interventions, she creates places that are both personal and reflect her relationship with the outside world. While studying at the Kunstakademie in Düsseldorf in 1969 she built a little house to temporarily shield herself from the daily political discussions in Joseph Beuys’ classroom.

She pursued her interest in small-scale structures all through the 1970s creating works ranging from a confessional on wheels to a bird’s nest. From this period stems her work Caravan (1976) included in the show. The mobile home is congenial in its dinky version of domesticity. The rutted plaster surface emphasizes its status as handmade artwork standing aloof from the petit-bourgeois original. Fragile to the core it cannot be confounded with the real thing.
Another historical work on display at Converso is entitled Swings (1984) consisting of a pair of anthropomorphically shaped deck chairs hanging from the ceiling. Their intimate togetherness high above solid ground evokes a relationship hold in suspense.

When Inge Mahn visited CONVERSO in preparation of the show, she was immediately drawn to its grand interior, eventually creating a site-specific work entitled The Snake (2019). As a point of departure served a massive ventilation pipe that the artist perceived as a foreign body in space. By prolonging the tube down to the floor where it is released to meander freely through the former church Inge Mahn turns a flaw into the reincarnation of a biblical animal.